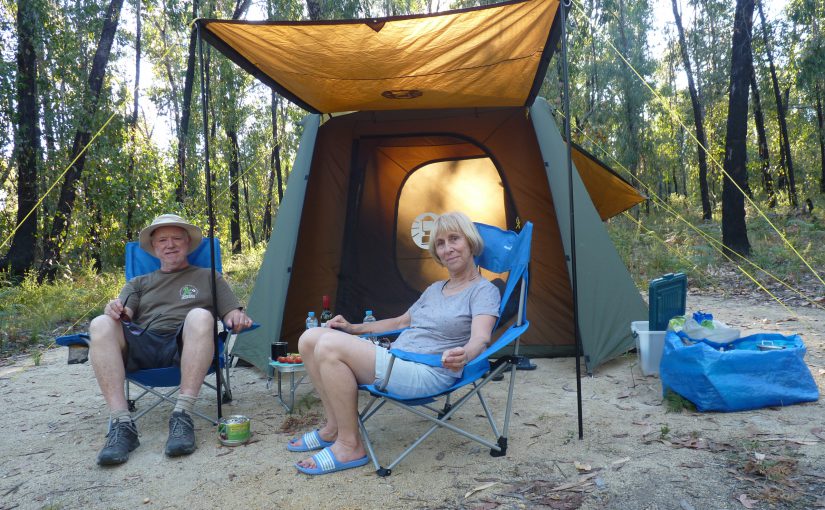 10 days ago we set off in a hired car on our first little adventure. Our plan was to spend 3 days camping in the Grampian mountains (300 kilometres), then visit our friends Ingeborg and Andrew in Adelaide (475 kilometres), go camping with them and then make our way back to Bobby’s in Melbourne.

Driving through the country –
Driving in the city is rather similar but once you leave the city things change dramatically! The motorway from Melbourne to Adelaide has only one single lane in each direction, but it does have an overtaking section of maybe one kilometre that returns every 10 kilometres! Much of the time we were driving on an empty motorway! Australia is, of course, very thinly populated (25 million inhabitants and 3 people per square kilometre), and 90% of Australians live in big coastal cities. Consequently, few people travel by car between the cities – nearly everyone flies if they need to travel large distances.

Stay awake!
Imagine you are the only car driving along a straight road for hundreds of kilometres at 110 kph (the maximum speed limit!): the scenery is the same on both sides (eucalyptus trees, gigantic fields of burnt grass) and it is nearly 40 degrees outside! After a couple of hours of driving and looking for koalas in the tree tops and kangaroos in the fields, the eyelids get heavier and heavier!! Australian motorways have lots of clever signs advising you to have break, take a nap etc.

Camping in the Grampians National Park
The campsites in the national parks are quite wild and are unmanned, so you have to book them online. I stupidly booked a place without really looking to see where it was! When we arrived at Halls Gap, the main town in the Grampians, we went directly to the information centre to get a map, find out where the campsite was and get some general information on the walks. When we were told our campsite was 30 minutes down a long, unsealed road and it was just possible to get there in a 2-wheel drive vehicle, we already had a feeling of foreboding. We set off and, sure enough, it was a terribly rough winding track down a deserted valley with the campsite at the bottom. The campsite had no other campers, no trees, no walking routes, no mobile phone signal, no nothing!! Luckily, an Aborigine ranger came by in a van and advised us to change camps by ringing the park’s central office – if we drove back up to a look-out point on the main road, we should have a signal, he said. It was 4.15 pm and the park office was to close at 5 o’ clock (as does everything in Australia, it seems!), so we sped back up the hill as fast as the terrain would allow, and then had one single bar of signal on my mobile! Luck was on our side – the lady in the office was very helpful and at 4.55 we had a new booking on a campsite near MacKenzie Falls, a popular tourist spot. Our site was great – under trees, some other campers around and walking trails, too!

Heatwave in Australia!
Have you experienced over 40 degrees in the shade? On our first day we walked to the MacKenzie Falls, quite dramatic waterfalls and a pretty river with pools and lots of rocks. There were ‘No Swimming’ notices everywhere but that didn’t stop Irmi! (Actually, we were told that someone had drowned there 4 weeks earlier). Well, we managed the walk to Zumstein (7 kilometres there and back) but it was tough in that scorching heat! The heatwave continued and 4 days later we were camping in Deep Creek National Park (opposite Kangaroo Island, near Adelaide) with our friends Ingeborg, Andrew and Eli. On one walk Andrew nearly collapsed from the heat – his wife poured cold water from a stream over his head – boy, did he scream becuase of the temperature difference (I would have done so, too)!

Australia Day – unfair to Aborigines?
We arrived in Adelaide on Australia Day. On this day, 26 January 1788, British ships arrived at Port Jackson and the flag of Great Britain was raised in Sydney Cove. At that time the whole of Australia was inhabited by hundreds of Aborigine nations who, after being there for 40,000 years, were decimated and generally treated very badly by the British colonists. The Aborigine people today call this day ‘Invasion Day’ and demand a change of date to celebrate the national holiday. There is a lot of debate in the media with the Green party being especially vocal in support of the Aborigine standpoint, but our impression is that most whites don’t care.
In the evening Ingeborg took us into the centre of Adelaide to the Australia Day celebrations consisting of concerts and a huge fireworks display.