Family reunion (short and sweet!) in Christchurch
By incredible coincidence my brother Alan and his wife Fiona, together with two of Fiona’s sisters, were visiting New Zealand at the same time! We agreed to meet for the couple of hours in Christchurch when our paths were to cross. However, we were late getting there and when we did arrive, we could not find their motel. Bobby saved the day by taking a taxi, returning with them and then we then had about 1 hour together!
In the 2 hours we were in Christchurch we could see the result of the devastation by the earthquake (of 6.3 magnitude) in 2011 when 185 people were killed. The destroyed houses and blocks have mostly been removed and so now a lot of empty areas and gaps between houses remain – it looks a very sad sight. 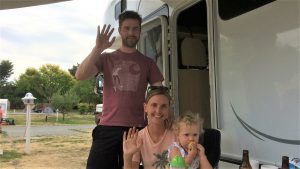 Tree House Hotel
After returning the Britz van and saying goodbye to Bobby, Sidsel and Mila (they had to return to Melbourne), we picked up our hire car and drove north to the Tree House Hotel in Cheviot. This was quite an experience! A very dynamic couple had built a house, mostly by themselves, with great imagination. They are in the middle of building guest rooms in a treehouse in a huge tree – luckily for us, they were not finished, so we could stay in a normal room in their house! 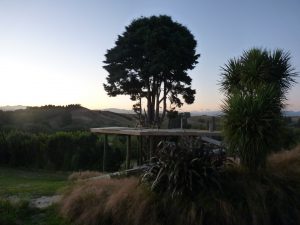 A week in Picton
After travelling around for a week in the confined space of a camper van, we had decided to spend a week in one place. On the Airbnb website we chose a friendly-looking flat in Picton, a small harbour town at the north end of the South Island where the ferries to the North Island leave. At first we were a little bit shocked by the run-down, shabby state of the flat but it was cosy, spacious and mostly clean. Our host John, however, was a very friendly pensioner who spoke amazingly good German as he had worked in Germany and had even had a German wife in his first life (that’s the best way to learn a language!). John gave us good tips on walks, wine-tasting etc and we had some deep discussions on society and politics. John’s garden was wild and overgrown but this also gave the house and entrance an exotic feeling! 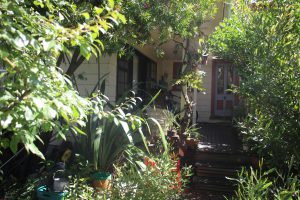 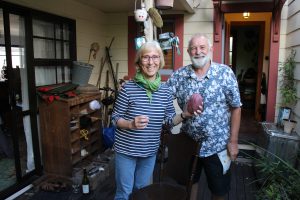 In spite of Picton being quite small, we found enough to do there – good walks, a museum, an aquarium, a cinema and some nice shops – and especially there was lovely waterfront and marina with the channel surrounded by mountains. 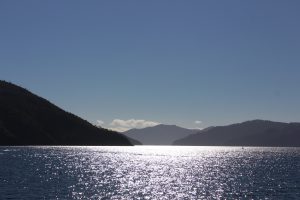 The very north of the South Island includes a complex collection of peninsulars and islands called Marlborough Sounds. The main channel, Queen Charlotte Sound, is the ferry route. These parts are quite isolated – there are a few holiday homes and the access is mostly only by boat. We took a boat trip of 90 minutes to get to Ship Cove, the point where captain Cook first landed in New Zealand in his ship „The Endeavour“ in 1777. 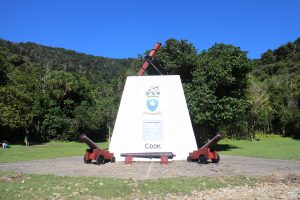 From Ship Cove starts one of the best known hiking paths in New Zealand, the Queen Charlotte Track. After arriving in Ship Cove, we then had a fabulous walk along this track by the coast to Furneaux Lodge at Endeavour Inlet. There is a romantic hotel here with a great bar and a lovely lawn reaching down to the water. A wedding, in the open on the grass before the sea, was just starting as we arrived. This was – beautiful New Zealand beer and entertainment! And luckily, the boat picking us up was late!

Craft Beer
You might already know that a beer revolution has been going on (in Germany too) called „craft beer“. These kinds of beer usually have a more fruity taste. Australia, and especially New Zealand, are well-known for growing aromatic, fruity hops and in the last decade hundreds of new, small breweries have started up – it’s a real cult here, it seems!
The New Zealanders mostly drink rather hoppy IPA (Indian Pale Ale) beers which are much stronger in taste than traditional German beer. They mostly buy beer in smaller bottles (33 ml) and it’s expensive: in shops 3-4 dollars (2-3 euros) per bottle and in bars about 7-10 dollars (= 4-6 euros), so you need to sip it and savour the taste!!
These beers also have amusing names like „Yeastie Boys“, Panhead Supercharger“, „Dirty Boots“, „Sauvignon Bomb“. In Arrowtown I made the mistake of asking the barman about a beer flavour, and he then went into great detail about the flavours of his different beers using the kind of flowery language which I only knew from descriptions of wine and whiskey. You can find some nice examples on this website: www.brb.co.nz