Cycling in Australia is a bit different – no touring! 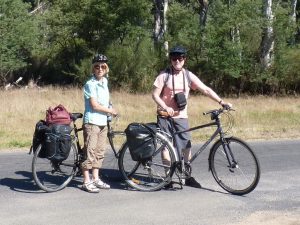 Here we are on the old rail track to Beechworth – during our our 6 days of cycling we only met one couple doing a longer bike tour! Everyone else was doing one-day rides, mostly on racing bikes

Four days after returning from New Zealand we’re off again, this time on a bike trip. We were lucky to be able to borrow touring bikes for 12 weeks! Cycling here is a bit different because nobody goes on bike tours as we know them. This is understandable as the distances from place to place are so big and the population so small. Cycling here means either road racing (did you know that an Australian, Cadel Evans, won the Tour de France in 2011?) or mountain biking (this is what our son Bobby does – it’s a bit crazy as they hurtle down a mountainside at breakneck speed – Bobby once showed us film from a camera on his helmet – shocked the life out of us – we’ll never watch that again!). However, there are a few old rail tracks that have been converted into bike tracks. One is in a very pretty area, mostly going through the valley of The Victorian Alps from Wangarata to Bright. For the first 60 km we travelled through the bush: Eucalyptus trees, rolling hills with cows on yellow grass that has not seen any rain for two months, a lonely bungalow every few miles, even with some flowers in the garden. No Café, no pub for a whole day`s cycling. You have to make sure you have enough drinking water. Further into the “Alps” it became greener, there was fruit and wine growing. The whole route is not very long, about 115 km, so we decided to go to the end and back again on the same track. 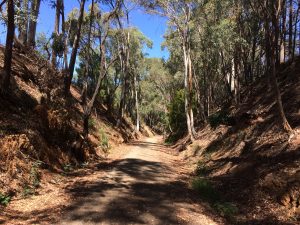 As last Monday was a public holiday, Labour Day (like our May 1st?), we met up with Bobby and family at an Airbnb near Bright (they had travelled by car, it is about 3 hours from Melbourne.) Our holiday house was totally clad with corrugated iron, as many older farm buildings are. We learned that the Australians find that very quaint, tasteful and romantic. Once you know that, you look at it with different eyes. In Bright there was a lively Festival. We had a river nearby, an open fire at night and wonderful starry, starry nights. The milky way and the southern cross were shining brightly over us.
See: https://www.railtrails.org.au/trail-descriptions/victoria? 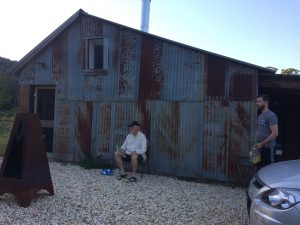 This rather shabby-looking shack is, in fact, a comfortable Airbnb! 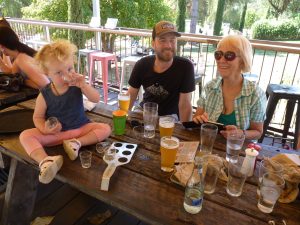 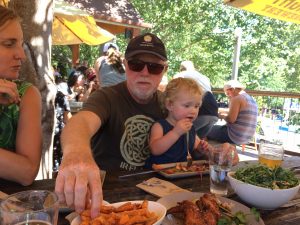 Visiting the festival in Bright is thirsty work!

The gold-mining town of Beechworth
Beechworth is a small town on our route to the mountains. Bobby had enthused about the town, mainly because of the famous brewery there but also because of its history (if you can call 200 years ago historical!), so we stayed in the same hotel on the way there and on the way back.
Gold-mining started in the mid-1850s – the very first miners found over 20 kilos of gold in a week! As you can imagine, the gold rush suddenly brought men and women from afar: the gold itself went on to Melbourne, which itself consequently became very rich. Two famous characters from Beechworth known by all Australians are Robert O’Hara Burke and Ned Kelly.
https://www.explorebeechworth.com.au/ 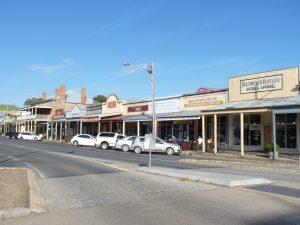 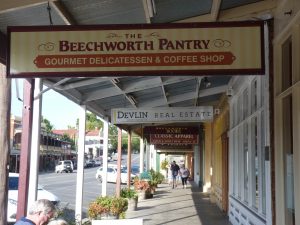 The Burke and Wills expedition
Robert O’Hara Burke was the leader of an expedition to find a route from Melbourne to the north coast of Australia on the Indian Ocean. Burke had been police chief in Beechworth, and Wills was a surveyor – neither leader had any skills in bushcraft!
The expedition was sponsored by the Victorian government, which wanted to be the first to build a telegraph line to the north (then on to Indonesia and Europe). This then became a race as South Australia with its capital of Adelaide also tried to be the first state to find a route.
The expedition ended in disaster: they did manage to get near the Indian Ocean but were blocked by thick mangrove swamps. Their return journey was tragic with both Burke and Wills dying on the way back lost in the bush.
All Australians know this story and you can find Burke and Wills on postage stamps, city statues, street names etc.
http://www.kidcyber.com.au/burke-and-wills-1860/
https://en.wikipedia.org/wiki/Burke_and_Wills_expedition

Ned Kelly
Ned Kelly is the best-known of all outlaws in Australia. He provokes a lot of controversy in Australia because many people consider him to have been badly treated by the authorities. Moreover, because he was of Irish descent, was anti-British and claimed to fight for the poor people, he had a lot of sympathisers. Today he is still regarded by some people as an Australian Robin Hood.
In 1871-74 Kelly was in Beechworth prison for stealing horses. Then, after his mother had been imprisoned, he formed an armed gang, raided banks and killed some policemen. The gang had primitive armoured suits and helmets (this is now the symbol of Kelly) and in a shoot-out with the police, Kelly was captured and then hanged in Melbourne gaol.
We did a Ned Kelly tour in Beechworth, visiting his cell in Beechworth gaol, as well as some of the houses associated with Kelly and learning about his life. Our guide was very entertaining and told us he had played the role of Kelly in one of the Ned Kelly films, of which there are several (by the way, Mick Jagger of The Rolling Stones played Kelly in one film!). In Beechworth you can find one of the several Ned Kelly museums.
See: http://www.ironoutlaw.com/ 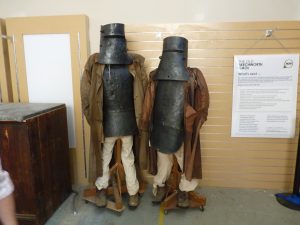 The armour worn by Ned Kelly and his gang