On the one hand, … . On the other hand …
So what can we say about Australia and the Australians after living here for 11 weeks?
Yes, people are extremely friendly and helpful. The waiters, shop assistants, fellow travellers, neighbours, policemen. One example sticks in my mind: when we were on the train to Wangaratta, a young Asian-looking woman came in, who was obviously upset, or unwell or both. She sat down and covered her face with her hands. The lady behind the food counter came out and sat down next to her to ask her if she could do something for her and when the lady shook her head she just went and got a bottle of water for her, gave it to her and put her hand on her shoulder. Later, the conductor came past and sat down beside her, just asking if he could do something and making sure she was alright. Would the conductor in Deutsche Bahn do that? The young woman calmed down later and seemed better.

There are a lot more signs here to educate or warn the public, for example to save water and avoid plastic: lots of drinking fountains everywhere and free water in eating places. ”Be smart, avoid plastic bottles.”
Flushing the toilet with this button will only use one third of the water. In the Zoo: „Use recycled paper, save the trees for the wild animals.“ Motorway slip road in big red letters: “WRONG WAY! GO BACK!”

In Victoria cars have priority so that the traffic can flow!

However, when shopping you still get everything packed in many plastic bags unless you say very clearly that you want to use your own bag. People constantly walk around with coffee-to-go in throwaway cups and every piece of food is wrapped in plastic or polystyrene. People buy an awful lot of takeaway food here! Most Australians are affluent and the economy is growing.

The way the Australians waste energy is a different matter again. Houses are badly insulated, and air-conditioning and heating goes literally through the window – the doors, the walls, the windows (single glazed!)the roof. And where are all the solar panels in this sunny place? We rarely saw any. In Bobby’s residential area of Melbourne, where land is expensive, new houses are two-storied. Otherwise nearly all houses here are bungalows. The cost of housing has rocketed in the last few years! Several Australians told us that their own children cannot afford to buy houses near the city. 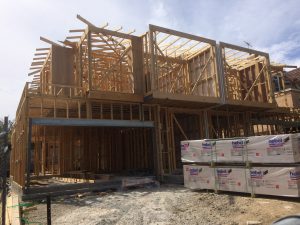 All houses are so-called frame houses – we have been calling them „stick-houses“! This is before … 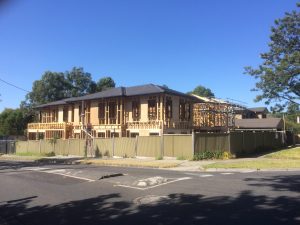 … and this is after