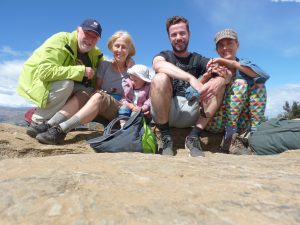 Landing in Queenstown
Landing in Queenstown was unexpectedly dramatic! We took an early morning flight from Melbourne to Queenstown, which lies in the mountains in the south of the south island. The flight-path for landing is between the mountains – as you approach the runway, you see mountainsides on both sides of the plane! We were told that this is one of the most difficult landings in the world for pilots (see https://www.youtube.com/watch?v=Rhkbia1dMcI). Anyway, we made it!

Immigration Control
Entry into New Zealand is very strict, maybe more so than into Australia – no foodstuff whatsoever (no sandwiches, no chocolates, no fruit etc) – as you walk towards the inspection area, you see rubbish bins and big signs with „Fines up to 100,000 dollars and 5 years in prison“ and „You have been warned!“. I still had half a packet of cough pastilles, which I quickly threw into a bin, just to be on the safe side! Then came the dogs (Beagles), sniffing around our clothes and bags. We had to take our shoes off and, when inspecting Irmi’s shoes with a magnifying glass, the customs officer exclaimed triumphantly, „There is a grass seed under your lace!“ I thought she would go to prison but thankfully that was not necessary! Fortunately, we survived all the inspections and felt very relieved to be allowed into the country!

Arrowtown and the Gold Rush
We picked up our Britz camper van for 6 people and made our way to Arrowtown, just 20 kilometres from Queenstown. This is where the Gold Rush in New Zealand started. The town today looks a bit like a wild west town as we know them from cowboy films. It has a pretty setting next to the Arrow River. After the first Gold diggers left, a lot of Chinese golddiggers arrived. They were obviously treated quite badly and shunned by the locals so they built their huts outside the town. Today you can still see several of these huts and placards explaining the history of the Chinese in Arrowtown. Mostly, they seem to have led sad lives – young married men who never saw their families again and often succumbed to opium to numb the homesickness and the cold.

Queenstown
During our 3 days in Arrowtown we spent one whole day in Queenstown. What we had not realized was that Queenstown is one of the main centres of mountain biking in the world. Indeed, in summer the town is full of MTB enthusiasts from the northern hemisphere, so you meet lots of Americans and Europeans here. The centre of town was full of young people in the many restaurants and bars next to the lake. We learned later from my brother and his wife, who by great coincidence, were staying in Queenstown at nearly the same time, that all accommodation was booked out. Because my brother had not booked accommodation, they had to pay 840 dollars (= ca 525 euros) for one night in a holiday flat!
The cable cars are specially equipped for taking bikes to the tops – Bobby had booked a bike and half-day pass, so we saw him a couple of times as he waited for the gondola or sped down the hill. We took the gondola to a mid station and then went Walking up Ben Lomond (names here are often taken from England or Scotland!) Sidsel bravely carried Mila and we had a good hike. Liuckily, we had glorious weather.

Geography and population
From the airplane you realize how mountainous this country is. Unlike in the European Alps, you see many areas with no towns or villages in the valleys. Looking at the map of New Zealand, you can see that half the country is uninhabitable and many parts of the mountains are almost impossible to get get to!
It might surprise you to learn (it did me!) that New Zealand has a poulation of only 4.7 million and the land has a population density of 18 people per square kilometre (Germany 229). This explains why there are not many main roads here, and you can drive on main roads for many minutes without seeing another car!

Tourism and foreigners
Our first impression: there are more Chinese here than New Zealanders!! Everywhere we went (tourist areas, of course) there were hundreds, if not thousands of Chinese. However, we learned that last week was Chinese New Year, so this might go some way to explaining this phenomenon. We have read that New Zealand gains a lot of income from Chinese toursists. We also read that the government here wants to introduce a new law which would forbid foreigners who do not reside in New Zealand from buying property as investments here. This seems to be a particular problem in Auckland and Wellington where there are many empty flats owned by Chinese.
Consequently, the house prices in New Zealand have risen considerably (e.g. by 18% in Wellington in 2017!).

Milford Sound
Milford Sound is a famous waterway leading to the open sea South Fjordland National Park and which is accessible.The long drive there along winding roads was worth it! The cruise was truly magnificent and certainly lived up to the brochure’s description: „a stunning natural attraction with a magical combination of mountain peaks, ink-dark waters and superb dramatic forest-clad cliffs“. 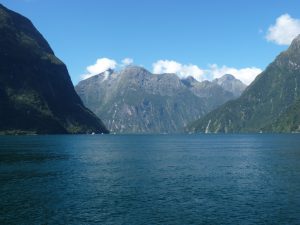 Mount Cook
Our next adventure was to drive to the highest mountain of New Zealand, Mount Cook, which is 3,724 metres high. In Mount Cook National Park there are 14 peaks over 3,000 metres. This is where Sir Edmund Hilary, maybe the most famous New Zealander, practised before his ascent of Mount Everest in 1953. Near the foot of Mount Cook is a very simple government campsite which cannot be booked in advance. As it is a question of first come, first served, we were worried we might not get a place. Again, after a long, fast drive (well done, Bobby!) through beautiful valleys and a lot of strong wind (we saw one van turned over!), we managed to find a good spot for the van. We decided to do the Hooker Valley Track, a 10-kilometer hike to a glacial lake where you have a great view of Mount Cook. It was a difficult walk in very strong gales over high,swinging bridges, looking down on a wild, cascading river. 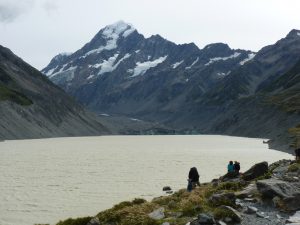