Melbourne, city of culture and sport 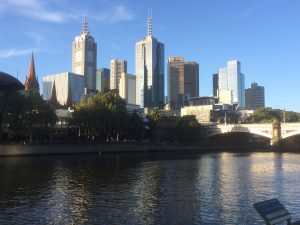 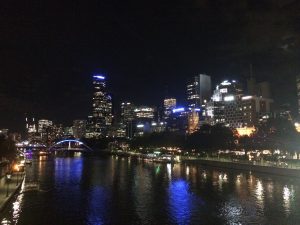 Views of Melbourne from outside the theatres

We have had a wonderful last week in Melbourne. We had two theatre highlights in Melbourne’s fantastic theatres: firstly, a super performance of John Lennon’s life and songs in a concert entitled “Lennon through a glass onion”. The two singers (70 years old!) had the full house rocking and singing! Two days later we saw a performance by the Melbourne Symphony Orchestra of “The Last Night of the Proms” (taken over from the Royal Albert Hall in London) – on the way in we were all given Australian flags to wave! What a great atmosphere! 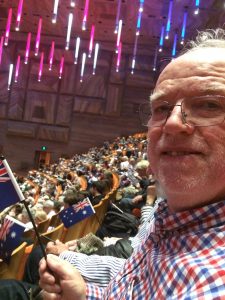 We were very impressed by the Arts Centre, which has 3 gigantic (underground!) theatres, and next door is Hamer Hall, a huge, modern concert hall where the Melbourne Symphony Orchestra plays.

Leaving Melbourne
We arrived in January with the Australian Open Tennis Championship and as we leave, the Formula 1 race has just finished. The race takes place near the centre on normal roads around a big park (Albert Park, presumably named after Queen Victoria’s German husband).

The End
We are beginning to feel a bit sad – tomorrow we’re travelling home after 12 weeks away! On the other hand, we are both looking forward to being back in Dresden and there’s still lots more to tell (if you want to hear it!).