Crossing Cook Strait to the North Island
After one very pleasant week in Picton, we had a booking for the Interislander Ferry to the North Island. Our host John, who also has a sailing boat, told us that crossing Cook Strait was often difficult due to the strong currents, rocks and crosswinds – „Just look at the number of shipwrecks there“ he said! Consequently, when we heard that the weather forecast was going to be stormy, Irmi, who gets seasick in a rowing boat on Dresden park lake („Carolasee“), was rather worried – well, she had been violently sick for 6 hours on crossing the English Channel a few months ago. Anyway, Irmi, due to a lucky break in the weather and some modern chemicals, survived the crossing.
This crossing must be one of the most dramatic in the world! Firstly, the ferry takes over an hour to sail through the Queen Charlotte Sound with its wonderful setting of mountains, forests and coves. After crossing the strait the ship turns into the beautiful, natural harbour of Wellington – this is very impressive with skyscrapers and lovely colonial houses on the hillsides. I spent nearly the whole journey on the deck looking for dolphins and whales, but they flatly refused to show themselves (it has been the same with koalas in Australia)! 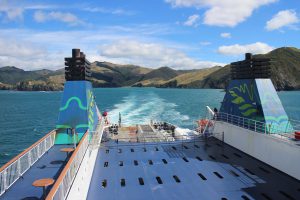 Ferry leaving the mouth of Queen Charlotte Sound – what scenery! 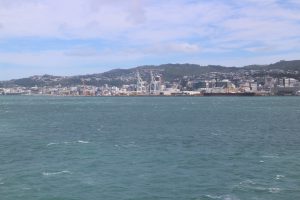 Wellington, capital city of New Zealand
The capital was moved from Auckland to Wellington in 1865. Situated at the southern tip of the North Island, Wellington enjoys a more central position and it was very difficult for members of parliament to travel to Auckland, which lies in the north of the North Island. Auckland, with 1.5 million inhabitants, is still over 3 times bigger than Wellington (400,000 inhabitants). The city is named after the Duke of Wellington, who is famous for (1) defeating Napolean’s army (together with a Prussian army under von Blücher) at the battle of Waterloo, Belgium, in 1815, and (2) inventing rubber boots for his army in muddy fields – today most British people call these „wellies“.

Our hostel „The Dwellington“
When looking for accommodation in Wellington, we found the city hotels and Airbnbs expensive. Because of the low price and amusing name, our attention was drawn to a hostel called „The Dwellington“ (a blended name from Wellington and the verb „to dwell“, a synonym of to live). We had often stayed in youth hostels but never in a plain „hostel“ and when our friend Helen Lauer (a New Zealander who helped us prepare our journey with lots of useful tips) warned us about hostels (her son had brought home bedbugs from a hostel in Berlin), I had reservations. Irmi, however, insisted on this hostel, so it was booked for 2 nights. Well, we had a pleasant surprise! „The Dwellington“ is situated between the Chinese and the American embassies, so we had no problems with security! It is a typical, grand colonial building made of wood with large bedrooms. The only (small) disadvantage is that you have to share bathrooms. In the mornings we grey nomads shared the big kitchen with all the 20-year-olds on work and travel visas!